Last January, I decided I needed more self love, more mindfulness and more yoga in my life, so I went in search of the perfect yoga retreat. I was going through a rough few months in terms of love and heartbreak and needed a mind, body and soul reboot.

I knew I wanted to go to a retreat in another country, but didn’t know where exactly (though Costa Rica was definitely high on my list). I did endless google searches, but was just left feeling overwhelmed by all of the choices, prices, dates and options. That’s when I went to trusty old Facebook, asking my friends for suggestions and my friend Erin left a comment of a retreat her friend Ashley was hosting. And it turned out to be the perfect one for me — in Costa Rica called, Cosmic Mind, Cosmic Body. I’ve been wanting to write about my experience for awhile now, and was just re-inspired when I saw that they’re accepting sign ups for the 2019 retreat. I wanted to share this with you, incase you’re looking for something similar like I was and just want an honest, reliable suggestion. So here’s mine. 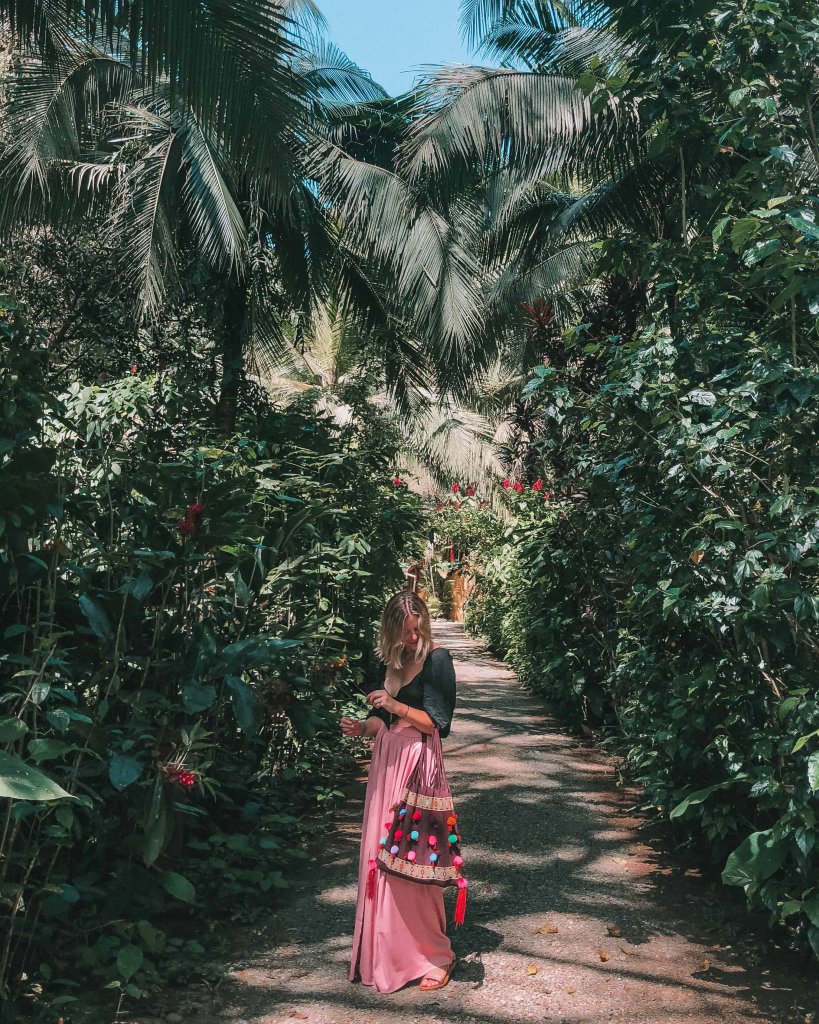 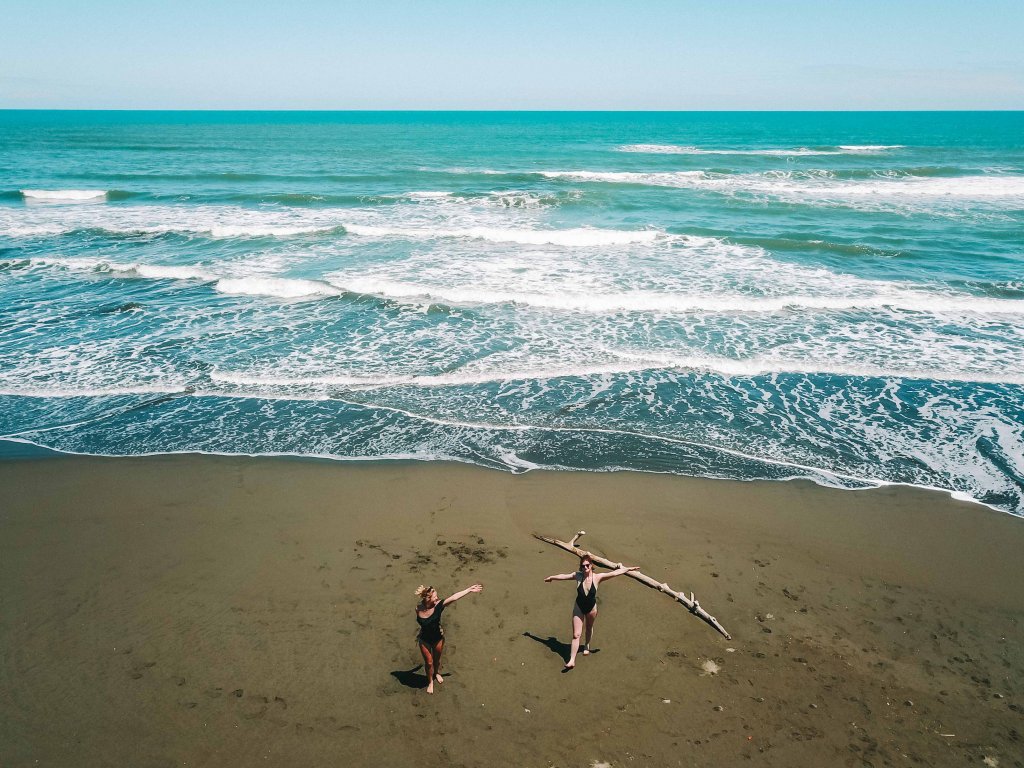 Cosmic Mind, Cosmic Body is a combined yoga and astrology retreat. Before I went, I wasn’t sure I even “believed” in the practice of astrology, but boy did I change my mind after attending. It’s right in the middle of the energy-recharging jungle on the east coast of Costa Rica, a ten minute walk to the ocean. The best of both worlds. Just imagine waking up to the sounds of the jungle (including howler monkeys, which I did not know were a thing).

I was still a bit nervous about traveling to a new country “alone” and meeting this new group of people I’d be sharing the next week with. But we were all connected in a Facebook group prior to the retreat and I felt so supported by Ashley and Sandy, the leaders of the retreat. They give you all of the perfect instructions and suggestions for anything you would want or need for the trip.

After arriving in San Jose, Costa Rica early (the night before we were set to leave), a few of the girls and I arranged to stay in a hotel before taking the shuttle together the next morning to The Goddess Garden in Cahuita, where the retreat takes place. Immediately, I felt so warm and welcomed by the girls and instantly knew it was going to be an amazing time. The 3 or so hour trip to the retreat was extremely fun getting to know all of the girls. I immediately made special bonds with them. 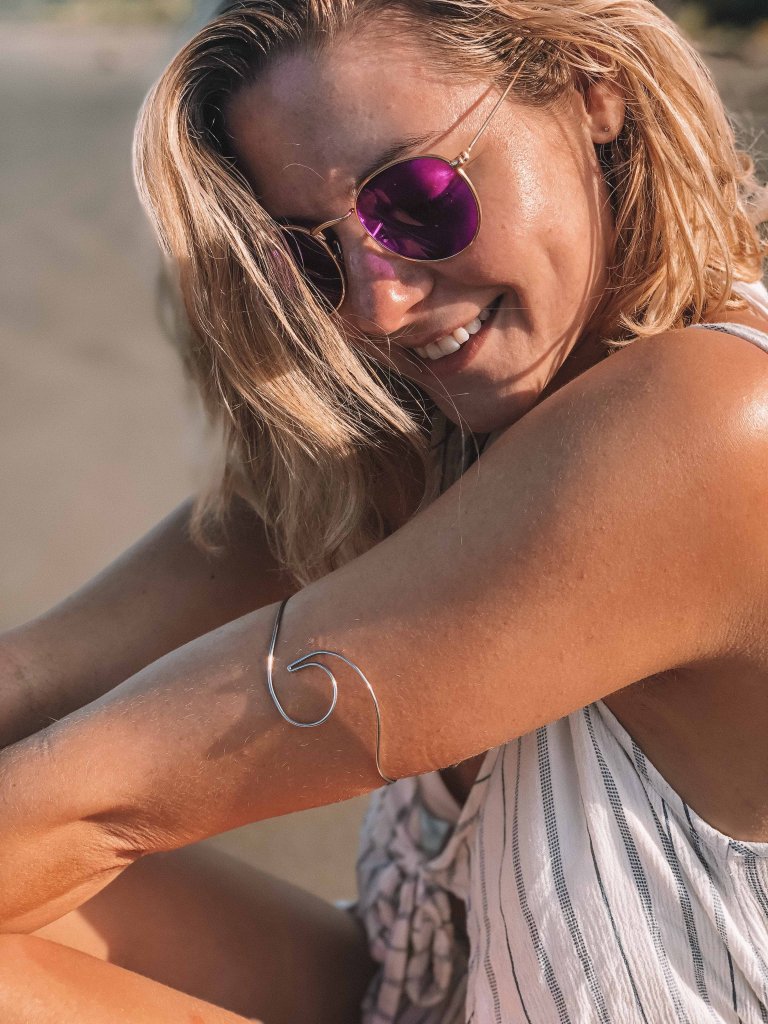 Once we arrived at the Goddess Garden and began settling in, is when the life-changing magic began. I chose the 6-person dorm, which I’m so glad I did. It felt like a camping retreat from when I was a little girl. Also it’s safe to say that the girls that I stayed with and I, all got extremely close. It was an amazing bond we made from sharing a room together.

As far as food, each meal was prepared for us, all being vegan or vegetarian. These were some of the most amazing meals I’ve ever had, and with the freshest fruits every day. Plus, my favorite dining room cat was there to greet us each meal.

Every day had a new theme, revolving around astrology. I’m not sure whether or not you believe in astrology, but I can tell you that you WILL after this retreat. There’s so much more magic involved in it than just those stupid little horoscopes you may read online. And Sandy teaches you all about that, with a comprehensive lesson each day, a full birth chart reading and so much more understanding of the stars and how they affect you personally. 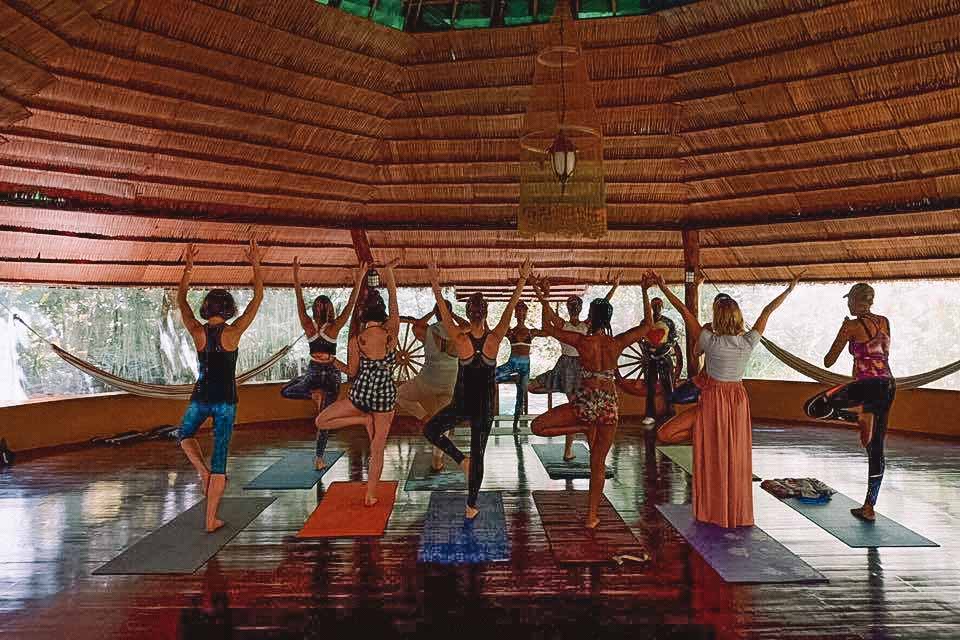 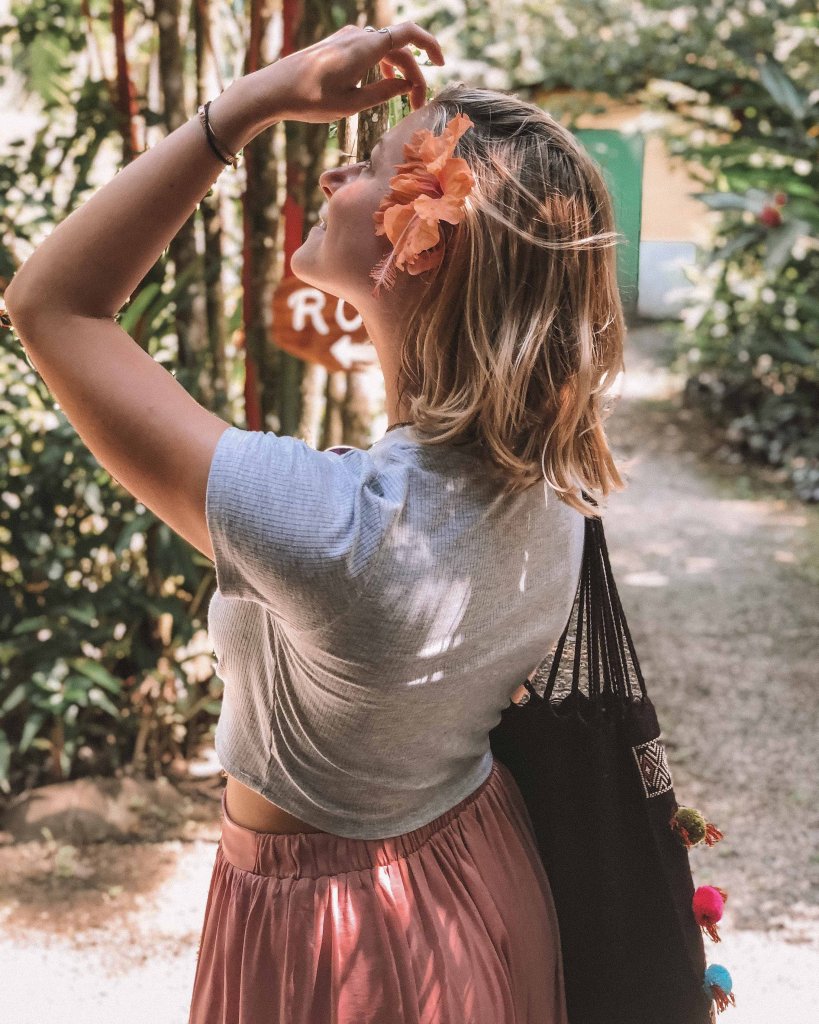 We started the mornings with yoga classes, right in the middle of the jungle, led by Ashley. Even the yoga classes were themed around astrology. So for a day when we learned about fire signs, the yoga class was full of heat and fire, while a day focused on water signs, was fluid and calming.

In each of the daily astrology “workshops” you are taught about the different signs, houses and how it all affects you. I don’t want to pretend I’m an expert now, but I’m definitely more knowledgable and continue to listen to an astrology podcast every Sunday. In the workshops, Sandy spends one-on-one time helping you decipher what the stars mean in your life and she shows you how to do the same. It’s amazing how much you learn about yourself through these.

One of the daily workshops was extremely emotional, deep and intense. Sandy shared a very personal story, leading every one of us to want to do the exact same. We all worked intensely through these self-limiting beliefs and emotions that we all were holding onto so deeply to. I, among others, shed tears for the pain we had felt in our past and present, this pain we were now working through and starting to release. I am telling you Sandy is magic, in the way she healed everyone in the group that day — even if just a little bit.

It felt as though every single day we just went deeper and deeper, allowing me the ability and space to feel more and more connected with myself, learning to choose my thoughts, learning to pick happiness and self love over everything else.

We were even lucky enough to have Ashley teach us Intensati classes. Which I didn’t know going into it, but are the most life-changing and BEST work out classes you will ever do. Basically it consists of dancing/moving, along with the yelling of positive affirmations. There’s so much power in sound and movement, that you can’t help but leaving this class feeling ten times lighter than when you entered. I wish I could goto these classes daily, but sadly there aren’t in any LA — but there are in NYC.

After the yoga class and workshop, we had a lot of free time in the afternoons to do different excursions. I basically did every single one that I could. They do cost extra though -FYI. One day, we went horseback riding on the beach, another we went zip lining and another day we went to the neighboring town to shop, explore and beach it up. Each of these was amazing. And now I know that I’m deeply scared of heights and almost wasn’t able to go through with the zip lining. Who knew? 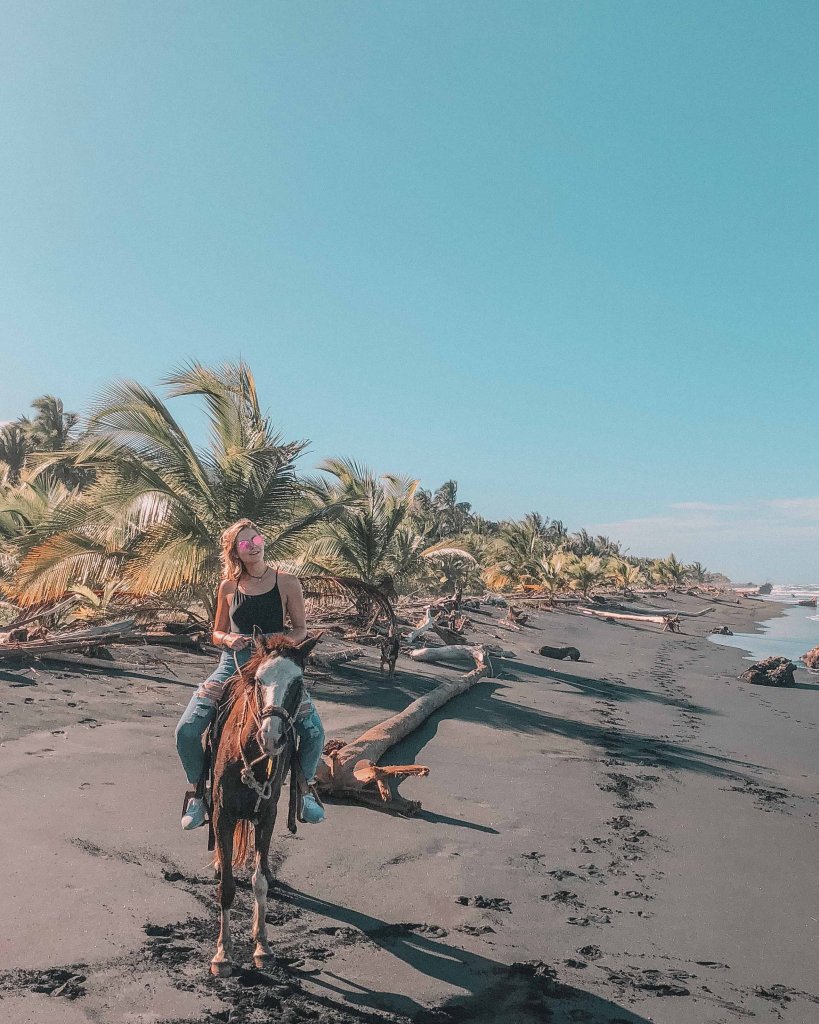 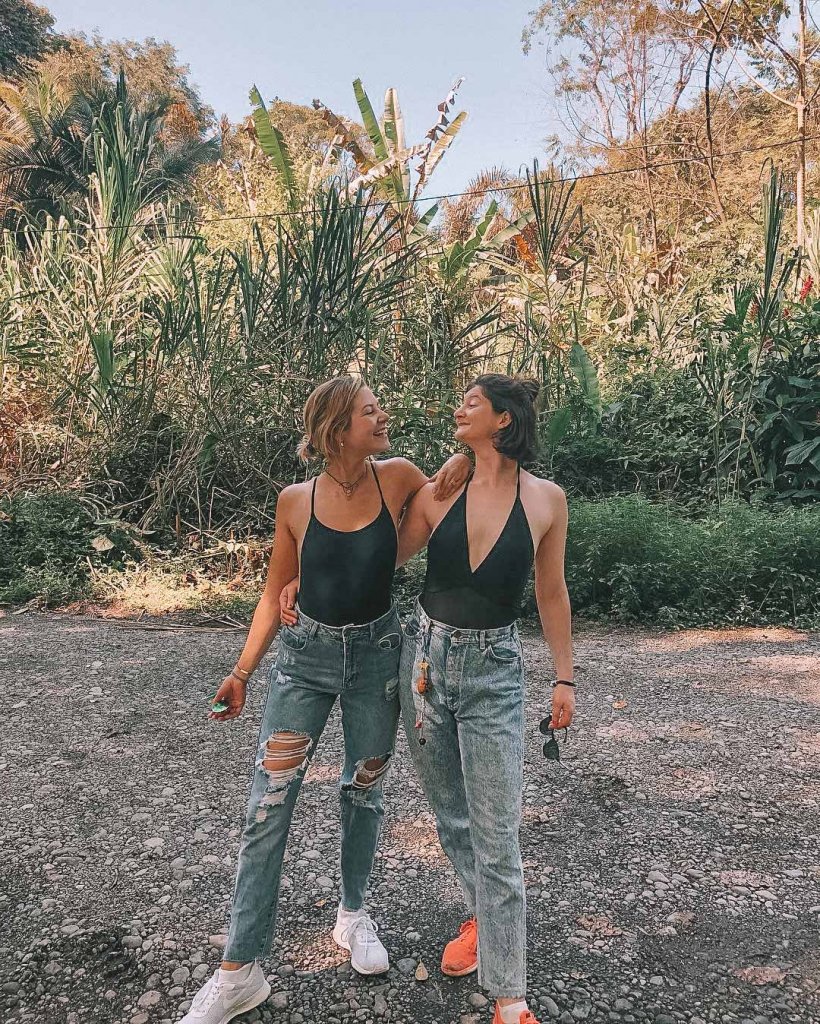 The other magical experience we had there was with the masseuse, who is actually also a reiki healer. You MUST do this. After my massage, he spoke to me and he spoke my heart. He knew what was wrong with me, emotionally and helped me to heal. He knew my heart was broken, and told me how healing the jungle energy was and to just soak it all in as much as possible. How he knew that was incredible. I had immediately started crying as soon as he spoke to me about it and could feel him reading into my heart.

On the last day, we had a circle together, where we all spoke kindly and deeply to one another and it felt like pure magic. The amount of love that night and during the whole retreat was so overwhelmingly beautiful, in the best way possible. I will forever be emotionally tied every single person from that trip, with unexplainable bonds, unlike any other relationships I have, even with my best friends. We all saw each other in our messy wholeness, held space for each other’s tears, and gave compassion to each other in all of the tender spots, where it was needed most. The whole retreat reminded me that I am love, I am loved, I give love and we all deserve only the best love. And who doesn’t need those reminders?

I’m Kristin, a New York native, who gave up her apartment to (unknowingly) go on a self-love journey of empowerment and adventure as a solo-traveling digital nomad. Whether you’re looking to become a digital nomad yourself, take your first solo trip, or simply love yourself just a bit more, these tips will help you and photos will ignite your very own sense of wanderlust. Let’s go on this journey together.